Bauhaus is the name of an architecture and design school founded by Walter Gropius in Germany in 1919, after the end of the First World War. Its full name is Staatliche Bauhaus, which translates as State Construction House. 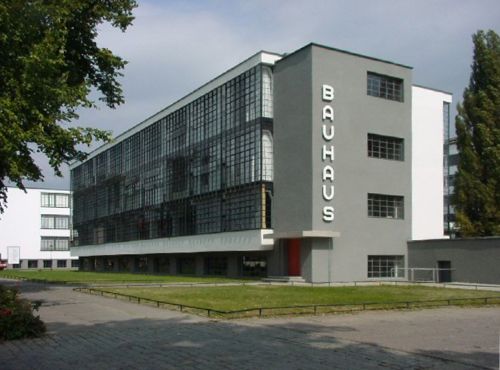 Headquarters of the Bauhaus in Dessau

The Bauhaus was created with the purpose of helping to rebuild German society after the devastation of the war, so it played an important role in the recovery of an industrial park.

It was based in three cities: first in Weimar, then in Dessau and, finally, in Berlin. Among the directors of the Bauhaus are Walter Gropius, founder, Hannes Meyer and Ludwig Mies van der Rohe, who had to face the harassment of the Nazi authorities that eventually ended up closing the Bauhaus in 1933.

Part of its teaching lines, in addition to including a new approach to architectural design, were extended to areas such as industrial design and graphic design, which until then did not exist as a differentiated profession. In this school the foundations for modern architecture and design were laid, in which the function is a pivotal element. According to its principles, the form should follow the function and not the opposite.

The Bauhaus school pioneered the teaching of new techniques and resources that became basic elements of the visual culture of future times. Photography, photomontage, avant-garde art, collage , typography, ergonomics, functionality and much more would become part of the content to study, which gave a turn to art education.

Likewise, the Bauhaus educational plan offered a comprehensive education that involved both technical knowledge and artistic, social and human training. It was, in effect, their program of integral human-social formation one of the causes of the persecution they suffered from the Nazi party.