The Bible is a collection or collection of sacred books, which contains the stories, doctrines, codes and traditions that guide Christians, based on Jewish tradition (Old Testament) and the proclamation of the Gospel (New Testament).

The Holy Bible (Biblia Sacra in Latin) is the best – selling book of all time. It has been translated into more than 2500 languages, and is available in different versions according to traditions and translations. It is currently also available in digital format.

In a figurative sense, the term is also used to refer to a book of great importance and that contains all the relevant information in a given area. For example, the Java Script Bible, the Business Administration Bible, the Musician’s Bible, the Soccer Bible, etc.

The Christian Bible is divided into two main parts: the Old and the New Testament. Testament ( berith in Hebrew) means alliance, covenant or contract. Each of them gathers a collection of sacred texts. Let’s know some essential details.

The Old Testament (Tanach for the Jews and Septuagint for the Greeks) is considered by Christians as the creation story. It includes the stories related to the creation of the world and the events of the Hebrew people until approximately 445 BC.

There are two versions of the Old Testament, which circulated interchangeably in the times of Jesus and the apostles:

The Catholic and Orthodox Churches recognize the Alexandrian canon or version of the Seventy . Protestant or Lutheran-inspired Churches use the Hebrew canon or Palestine canon consisting of 39 books. For its part, the Coptic church admits other books such as the book of Enoch and the book of the Jubilees.

After about 400 years of silence, the New Testament, which contains 27 books , began to be written. It is considered by Christians as the history of salvation.

The New Testament contains the gospels, which present the life and teachings of Jesus Christ. These cover the events during his life, his message, his death and his resurrection.

In addition, the New Testament also contains the narration of the facts of the apostles (which tells of the birth of the early Church), the pastoral letters of the first Christian leaders and the prophetic book of the Apocalypse.

Copies and translations of the Bible 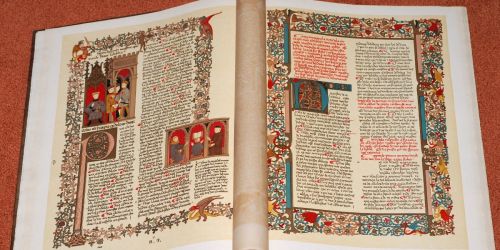 Before the invention of the printing press, the sacred books were copied manually.

In the case of the Jewish holy book, which corresponds to the Christian Old Testament, the copies were made by Hebrew copyists called masorettes. They were responsible for copying the Hebrew Scriptures between the 6th and 10th centuries, and used to count the letters to avoid mistakes.

In the Christian world, translations and copies of the Bible were carried out by the monks in the monasteries, many of whom were also responsible for incorporating in them illuminations or illustrations of great artistic value.

The monks could copy alone or in groups under the dictates of a brother, which accelerated the production of specimens. Therefore, it was not surprising that there were some errors in the process.

There are different opinions regarding the reliability, conservation and integrity of the Bible because many years have passed since the earliest manuscripts, and also because of possible errors in translations into different languages ​​and divergent opinions in dogmas.

The first translation of the Bible into vulgar language, and also the first printed version, was the Bible translated by Luther into German in the 16th century.

Archeology has also provided interesting discoveries in relation to the conformation of the historical biblical texts themselves.